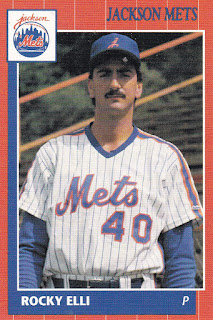 Rocky Elli took a no-hitter into the seventh inning of this July 1991 game for his Reading Phillies - and he knew it, according to The Hartford Courant.

He knew it because he promptly walked one and then gave up a run-scoring double, The Courant wrote.

"Unfortunately, I was aware of the no-hitter," Elli told The Courant afterward. "I started overthrowing, trying to do too much."

Elli played for Reading that year in his sixth season in the pros. He played in two more campaigns. He made AAA, but he never made the majors.

Elli's career began in 1986, taken by the Mets in the second round of the June-secondary draft out of Kishwaukee College in Illinois.

Elli started with the Mets at rookie Kingston. He got into 16 games there and started three. He went 0-2, with a 6.68 ERA.

Elli made AA Jackson in 1990, but saw abbreviated time. He got into 17 games, starting 15, and went 3-6. He threw five scoreless in the club's first game of the year, but followed it up with an outing where gave up eight runs without getting out of the second, according to The Jackson Clarion-Ledger.

Elli then moved to the Phillies organization, traded with another player for Tom Herr. He played 1991 between AA Reading and AAA Scranton. He saw 18 relief appearances at Scranton. He snagged a liner in one May game there and turned it into a double play.