Ricky Strebeck started as a catcher, ended as a pitcher, came up short of the majors - 31 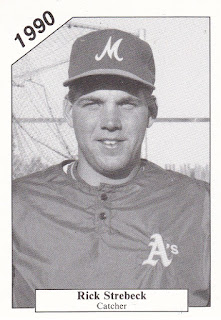 Ricky Strebeck turned in a solid performance in this March 1989 game for Rice University, according to The Associated Press.

Strebeck went 3 for 4 and knocked two doubles, as his Owls fell to Texas Christian, according to The AP.

Strebeck performed well enough that year to turn pro with the Athletics. He played five seasons - four of them as a pitcher. He briefly made AAA in two of those campaigns, but he never made the majors.

Strebeck's career began that year in 1989, signed by the Athletics as an undrafted free agent out of Rice. Strebeck was also credited as Rick Strebeck.

Strebeck started with the Athletics as a catcher. He saw 18 games at short-season Southern Oregon. He hit .217, with five RBI.

He then moved to the pitcher's mound. In 1990, the new hurler got to play between three different levels. He saw high-A Modesto, AA Huntsville and even AAA Tacoma.

Strebeck went 2.2 innings at Tacoma over three outings in 1990 without giving up a run. Overall on the year, he picked up three wins, six saves and a 3.58 ERA.