Mike Kennedy played, then coached at Elon University; In between, he played as a pro - 18 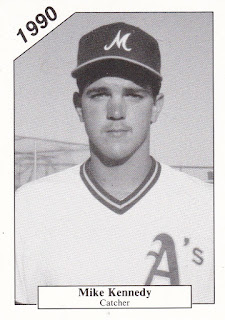 The Mariners seemed to have an eye on North Carolina's Elon University and SB Nation's Lookout Landing spoke to Elon head coach Mike Kennedy in 2019 about why.

Seattle took four players from the school from 2016 to 2019, including making an Elon player the organization's first-round pick in 2019, Lookout Landing noted.

"I don't think it was one particular player where all of a sudden, here come the Mariners," Kennedy told Lookout Landing. "We have a pretty good idea of how to coach guys, how to let them play and figure things out."

By 2019, Kennedy knew about players being drafted out of Elon as the 2018-2019 season marked his 23rd season as head coach at the school. Before that, though, Kennedy was a player at Elon himself, one who got drafted and played in the pros.

Kennedy's career pro career began in 1990, taken by the Athletics in the ninth round of the draft out of Elon.

At Elon, Kennedy won honorable mention All-American twice as a catcher and hit .321 in 1990.

Kennedy started with the Athletics between the rookie Arizona League and high-A Modesto. He it .174 in 27 games between them.

He then moved to short-season Southern Oregon for 1991. He got into 33 games there and hit .294, but that season turned out to be his last as a pro.

In his time as head coach, Kennedy has led his squads to 19 winning seasons and 17 of those that included 30 or more victories.