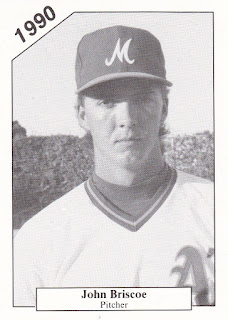 Briscoe's career began in 1988, taken by the Athletics in the third round of the draft out of Texas Christian University.

Those 17 outings in 1996 were also his last outings in the majors. Briscoe, though, continued playing in the minors and independent ball through 2002. He played his final five seasons with independent Somerset in the Atlantic League.