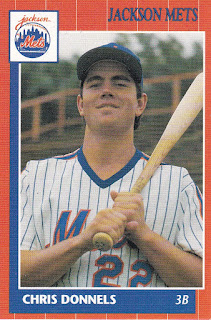 Chris Donnels picked up a hit in his major league debut. But, more importantly, his solid fielding turned heads and made highlight reels, The Los Angeles Times wrote.

It was a debut Donnels' new manager with the Mets, Bud Harrelson, stood in awe of, according to The Times.

"What memories to have of your first game," Harrelson told The Times. "That's something they can never take away. He appreciated the shot he was getting, he took advantage and he had an outstanding game."

Donnels took his shot to a career that spanned more than a decade and saw him play in eight major league seasons and three in Japan.

But it was another kind of shot that would mar Donnels' career, the steroid and HGH kind of shots. Donnels would later admit to using both and be named in the Mitchell Report.

Donnels' career began in 1987, taken by the Mets in the first round of the draft, out of Loyola Marymount University in Los Angeles.

"This is very exciting. I've been jumping around since I heard," Donnels told The Times after the Mets selected him. "It's exciting to meet all the guys. I'm real interested in getting out and playing."

Donnels started between rookie Kingsport and single-A Columbia. He hit .275 between them. He made AA Jackson in 1990, then AAA Tidewater and Queens in 1991.

He then returned stateside in 2000, with the Dodgers. It was then that he reunited with someone he had met with the Mets in 1991 and 1992, Kirk Radomski, according to the Mitchell Report. Radomski then sold Donnels steroids and HGH.

Donnels spoke with baseball investigators and his account of his own performance enhancing drug use is contained in the report. He said he started taking it to get back from shoulder surgery faster.

Donnels explained later to The Los Angeles Daily News that the injuries got to him. Those were why he turned to the substances.

"I was not trying to improve my performance," Donnels told The Daily News said. "I wanted to be able to perform."