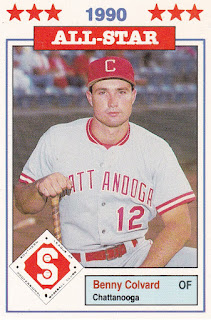 Benny Colvard went from one pennant race at AA Chattanooga to another at AAA Nashville in August 1990, The Nashville Tennessean wrote.

But, exactly what his role with the AAA Sounds would be, the outfielder hadn't been told, The Tennessean wrote.

"Nothing much has been said," Colvard told The Tennessean after arriving "I'm just here to play and help when and where I can."

Whatever Colvard's role ended up being at Nashville, it ended up brief. He played 14 games there that year and, in six professional seasons, he never had a role in the majors.

Colvard's career began in 1988, taken by the Reds in the 17th round of the draft out of Southeastern Oklahoma State University. Colvard was also credited as Ben Colvard.

In 2007, Southeastern Oklahoma inducted Colvard into its athletics Hall of Fame.

"It's a great honor," Colvard told the school newspaper. "It's something I'd always hoped for, but I never really expected."

He started with the Reds at rookie Billings. He also saw two games at single-A Greensboro. He hit .382 in 53 games.

Colvard played most of 1990 at Chattanooga, hitting .288. He also made the league all-star team, providing a key double in the game. He hit .267 over his 14 games at Nashville.

Colvard returned to Chattanooga each of the next two seasons, where he hit .281 and .257. He then played one final season with the Royals at AA Memphis, ending his career.