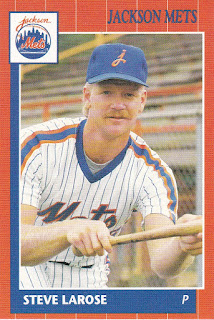 Steve Larose faltered a bit toward the end of this three-inning 1987 relief stint at short-season Little Falls, but it was enough for the win.

Larose came on in the ninth inning and pitched to the 11th. He gave up the go-ahead run in the 11th on a home run, but his Little Falls teammates picked him up in the bottom frame for the walk-off win, according to CharliesBallparks.com.

Larose turned in that relief performance in his first professional season. He went on to play in five more. He never made the majors.

Larose's career began that year in 1987, taken by the Mets in the 10th round of the draft out of Crowder College in Missouri.

Larose saw 26 outings his first year at Little Falls, two starts. He picked up three wins and eight saves, with a 2.98 ERA.

Larose arrived AA Jackson for 1990. He helped a starter out of an April jam by inducing a double play. He also helped preserve a 1-0 win that month.

Larose played in 19 games at Jackson that year. He then spent the other half of 1990 back at St. Lucie. Overall, he turned in a 3.77 ERA and saved eight.

He moved to the Astros in 1991, traded there with one other player for Dan Schatzeder. He played 1991 back at Jackson, the new Astros affiliate. In 26 outings, he picked up one win and six saves.