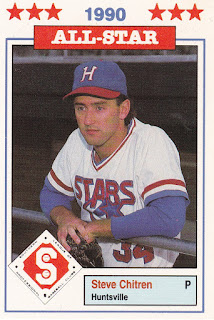 Steve Chitren experienced success at Stanford, enough to be considered the school's greatest reliever. So, when he moved to the pros, he worked to continue that success, according to The Stanford Daily.

He continued it to the majors.

"It's what drives you to keep working hard," Chitren told The Daily of that success. "(And) it makes you aware of what your limitations are."

Chitren worked hard and made the majors in 1990. He returned for the full season in 1991. He pitched in a total of 64 games in the majors, all in relief. He played four more seasons, but couldn't work his way back.

Chitren's pro career began in 1989, taken in the sixth round of draft out of Stanford.

Stanford won its second title after Chitren got out of trouble in the championship game. He came into the game in the eighth after starter Jack McDowell walked the first two. Chitren soon got out of it without allowing a run.

"After I walked those two guys in the eighth, I needed help," McDowell told The Associated Press afterward. "Steve Chitren picked me up big time,"

Chitren played his first year with the Athletics between short-season Southern Oregon and single-A Madison. He saved seven games at Madison and turned in a 1.30 ERA between the two levels.

He made AA Huntsville for 1990, saving 27 games on the year. He also saw a game at AAA Tacoma and eight with Oakland.

Chitren debut with the Athletics Sept. 5. In 17.2 innings of work down the stretch he gave up two earned runs for a 1.02 ERA.

Chitren returned to the minors and AAA in 1992. He then played 1993 between Huntsville and Tacoma. He moved to the Orioles and AA Bowie for 1994 and briefly played in 1995, ending his career.