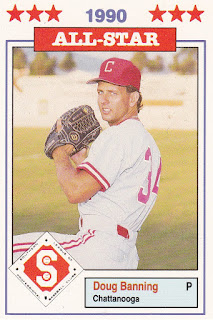 Doug Banning balked in a run, but he still got the win, according to The San Bernardino County Sun.

Banning went seven innings in this April 1988 game for single-A Fresno and gave up three runs. The second run, then to tie the game, came in on Banning's fourth-inning balk, The Sun wrote.

Banning played in that single-A game in his fifth season as a pro - after an abbreviated campaign at AAA Edmonton the year before. He went on to play in Mexico and return at AA for a season, but Banning never made the bigs.

Banning's career began in 1984, signed by the Angels as an undrafted free agent out of the University of Northern Colorado.

He played 1985 between single-A Quad City and AA Midland. He went 9-8 overall, with a 4.32 ERA. He picked up the loss in an August game for Midland.

Banning played 1986 completely at Midland and then started 1987 at AAA Edmonton. His season at Edmonton, however, turned out to be brief. He got into just six games in relief, giving up six earned in 9.2 innings of work.

Banning played 1989 in Mexico with Dos Laredos. He returned stateside in 1990 with Chattanooga and made the Southern League all-star team. Overall, he went 9-10, with a 4.48 ERA in 26 starts to end his career.