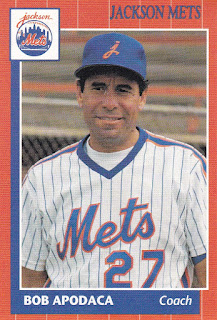 After a decade as pitching coach in Colorado, Bob Apodaca's job appeared to be on the line in June 2012, according to The Denver Post.

Apodaca, though, defended his work, and his approach and believed himself the right coach for Colorado's young staff, The Post wrote.

"Absolutely," Apodaca told The Post. "I have patience. I am delivering the same message I have been delivering for nine years, and we have had a lot of success here."

Apodaca didn't last much longer in Denver. But his success included helping the Rockies to the 2007 World Series.

He'd also had success enough previously to serve as pitching coach for the Mets in Flushing and Brewers in Milwaukee, all after seeing time in five major league seasons and navigating the Mets minor league system as a coach.

Apodaca's long career in baseball began in 1971, signed by the Mets as a free agent out of Cal State Los Angeles and Cerritos College.

Apodaca started at single-A Visalia. He made AA Memphis for 1972 and then AAA Tidewater for 1973. He then debuted in Flushing, playing in a single game that September.

Apodaca started his coaching career by 1982, serving that year as pitching coach at AA Jackson. Over the next 15 years, he saw four seasons at AA Jackson another four at single-A Columbia. He served as AAA pitching coach for the Mets from 1991 to 1996.

In 1996, he then returned to the majors, as Mets pitching coach. In May 1997, he praised his relievers to The New York Times.

'"Our bullpen is comprised of guys who throw strikes," Apodaca told The Times. "They're going to dominate the strike zone, and that's what you want."

Regarding the challenges of pitching in high-altitude Denver, Apodaca focused on the game, according to SBNation's Purple Row.

"I don't care if you are pitching in Death Valley or Mount Everest, the fundamentals of good pitching remain the same," Apodaca told the site after he moved to the role of a Rockies minor league instructor.