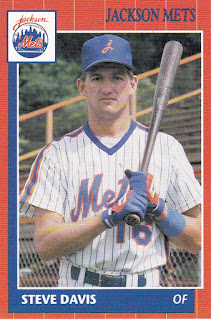 Steve Davis started the 1991 season for AA Williamsport in a slump - an 0 for 29 slump, according to The Hartford Courant.

He broke out of it with a double in an early May contest against New Britain. Afterward, he spoke with The Hartford Courant about getting through it.

"I'm not the kind of guy who gets mentally frustrated. I knew it would come sooner or later," Davis told The Courant.

Davis got out of that slump, but he didn't make it out of that season. That campaign marked his seventh in the pros, his third with time in AA. But one thing that never came for Davis was the majors.

Davis' career began in 1985, taken by the Reds in the second round of the draft out of Plano East High School in Texas.

At Plano East, Davis twice won all-district honors. He also won district Player of the Year and made the all-state team.

He started with the Reds at rookie Billings. He saw 14 games in 1985 and hit .196. He reached base on a dropped third strike in a July game.

He played 1988 at single-A Cedar Rapids. The outfielder made the "play of the game," according to The Cedar Rapids Gazette, as he made a leaping grab in an August contest with the sun in his eyes and then doubling off the runner.