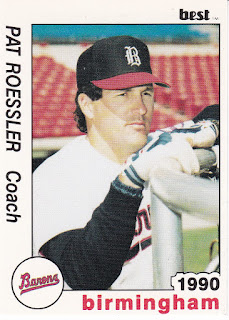 The Sarasota White Sox were on a hot streak and Sarasota hitting coach Pat Roessler credited adjustments made earlier in the year, according to The Sarasota Herald-Tribune.

But it wasn't so much the on-field success he saw in his players, Roessler told The Herald-Tribune in August 1993, it was seeing the difference in his players from the start of the year until then.

"My job is to help them get better," Roessler told The Herald-Tribune. "We try to get them where they have a chance at success, not just in A-ball, but further up the line."

Roessler himself was having success, coaching in the minors for the White Sox. He'd seen AA Birmingham already. Later, with a switch in organizations, he would go the furthest up the line that is possible, to the majors as hitting coach of the Montreal Expos.

Roessler's career in baseball began at the University of Arizona, where he played from 1979 to 1982. From there, he soon became a coach, not recorded as playing as a pro.

Through the 1980s, Roessler served as assistant coach at Old Dominion, and served as a manager in summer collegiate ball, for Clarinda and Hutchinson in the Jayhawk League and Kenai Peninsula in the Alaska League, according to ProCards.

Roessler joined affiliated ball in 1989, with the White Sox, serving as hitting coach for Sarasota. He moved to AA Birmingham for 1990. At both Sarasota and Birmingham, Roessler worked with former White Sox top pick Kurt Brown.

"It took me 4 1/2 years before I found a mentor. That person was Pat Roessler," Brown told MLB.com years later, "and he showed me it wasn't only working hard that paid off, but knowing how to approach the game and how to learn."

"A lot of left-handed power hitters are dead pull hitters," Roessler told The Blade of Tracy, "but Andy's not afraid to hit the ball to the opposite field."

Roessler moved to the Astros system in 2002, as minor league hitting coordinator, then to the Yankees as player development director for 2006.