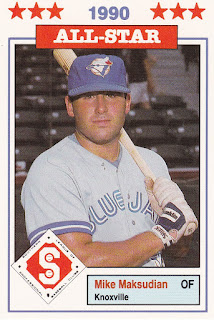 Mike Maksudian was a valuable player to have, not only for his contributions on the field, but off the field, as well, his coach at AAA Portland told The Associated Press.

"He keeps everybody on their toes," Portland coach Paul Kirsch told The AP. "We're together every day for five months, and life can get monotonous pretty quickly. Mike is one of those guys that keeps everybody loose. You need players like him in the clubhouse and on the field."

The way Maksudian went about keeping everybody loose was through his stomach. In exchange for cash, or even a simple dare, Maksudian would eat everything from beetles to cockroaches, to the horror and entertainment of his teammates.

Maksudian's value on the field showed itself in his call-ups to the majors in three separate seasons, the Blue Jays, Twins and Cubs finding his skills were worthy of a total of 34 games in the bigs.

Maksudian's professional career began 1987, signed by the White Sox as an amateur free agent, out of the University of South Alabama.

With the White Sox, Maksudian started in 1988 at single-A South Bend, getting a brief look at single-A Tampa. By August, though, he was with the Mets in St. Lucie, after a trade.

After a season with independent Miami, Maksudian arrived with the Blue Jays for 1990, playing the year at AA Knoxville.

It was in 1992 that Maksudian made his major league debut. In September, he got into three games, going 0 for 3.

This was the same Blue Jays team that went on to win its first World Series. Afterward, Maksudian, who didn't play in the playoffs, but stayed with the team, commemorated the achievement with a Blue Jays tattoo on his backside.

Maksudian moved to the Twins for 1993, taken off waivers. He eventually played five games in Minnesota, getting his first two major league hits.

For 1994, Maksudian arrived with the Cubs. He also got his longest look at the bigs, 26 games. He picked up seven hits in 26 at bats. In late-July, Maksudian was credited with a good diving stop as he subbed for an ill Mark Grace.

Maksudian played one more season, at AAA with the Athletics, ending his career.

Back in 1993, as his Blue Jays made preparations for the playoffs, Maksudian's off-the-field efforts were what got the notice of national publications, including Sports Illustrated. Sports Illustrated noted then that in his second week in the bigs, Maksudian ate both a locust and a cricket.

"I've never been one to turn down a dare," Maksudian told SI. "I'll do just about anything short of suicide."