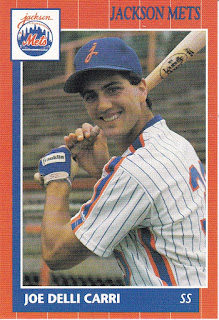 Having played at AA Binghamton the previous two seasons, Joe Dellicarri returned in 1994, but with the visiting Trenton Thunder, The Binghamton Press and Sun-Bulletin noted.

Upon his return that May, Dellicarri spoke to the paper about being back in Binghamton as a visitor.

"Being on this side or the field is really strange," Dellicarri told The Press and Sun-Bulletin. "Warming up on the left-field line instead of the right-field line, it's like I'm in a different park."

Dellicarri played with Trenton in his sixth season as a pro. He played in one more brief campaign, but he never got to experience the majors.

Dellicarri has since gotten to see a different side of the game, one from the stands, as a pro baseball scout.

Dellicarri's career began in 1989, taken by the Mets in the 38th round of the draft out of the University of Pennsylvania. Dellicarri was also credited as Joe Delli Carri.

Dellicarri started with the Mets at single-A St. Lucie and short-season Pittsfield. He hit .282 in 51 total games.

In a July game, Dellicarri hit poorly in batting practice, but then went on to have two key singles, according to The Palm Beach Post.

Dellicarri made AA Jackson for half of 1990, playing the other half at high-A St. Lucie. He then played all of 1991 at AA Williamsport. He hit .242 in 80 games at Williamsport.

Dellicarri got his first look at AAA in 1992, five games at Tidewater. He went 4 for 16. He played the rest of the year at Binghamton.

He returned to Binghamton for 1993 and saw seven more games at AAA. He then moved to the Tigers system and Trenton for 1994. He hit .225 in 116 games. He saw his final games in 1995, four appearances at AAA Toledo to end his playing career.

Dellicarri soon found himself in scouting. He rejoined the Mets as a scout for 1996. He joined the Pirates by 2010 and, in 2019, was serving as Pirates amateur scouting director.

Dellicarri spoke to The Pittsburgh Post-Gazette in June 2019 about the club's draftees, including first-round pick Quinn Priester.