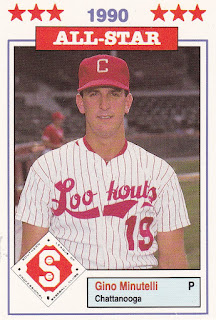 Gino Minutelli's professional career started at the urging of a coach for an independent Northwest League team, the Tri-City Triplets, according to The Los Angeles Times.

Minutelli, then a delivery truck driver, took the coach up on the offer - and he made the team, The Times wrote.

"I knew I had something (to contribute to baseball)," Minutelli told The Times as his career got underway in 1985. "Someone finally found it."

Minutelli went from delivering construction materials to delivering baseballs as a pro. He also eventually made baseball deliveries in the major leagues over three seasons.

Minutelli's career began that year in 1985, signed by Tri-City out of Southwestern College in California.

Minutelli started with Tri-City and posted an 8.09 ERA. But he also struck out 79 batters in 57 innings. His strikeouts led to multiple scouts showing interest in him, according to The Chula Vista Star-News.

"One thing about Gino," Tampa manager Marc Bombard told The Star-News, "he's a battler. When he gets his curveball over (the plate) then you know right away he's going to have a good night. He's extremely tough when his curve is working."

Minutelli played 1988 at AA Chattanooga, then had a brief 1989 campaign. He played 1990 between Chattanooga and AAA Nashville. That September, the former delivery driver debuted in the majors.

Minutelli got into two games in relief for the eventual champions. In one total inning, he gave up one earned.

Coming out of spring training, Minutelli took the mound for the Reds in an exhibition, picking up the win in relief. He also still hoped to make the big club out of camp.

"I feel like I've done well and proven myself," Minutelli said afterward, according to The Bowling Green Daily News. "I guess we'll find out in the next few days what's going to happen."

Minutelli played 1992 back in the minors, going 4-12 at AAA Nashville. He moved to the Giants for 1993, getting back to the majors for nine more outings in San Francisco. He gave up six earned in 14.1 innings of work.

Minutelli then got into two more seasons in the minors, at AA Canton-Akron with the Indians and AAA Tucson with the Astros in 1994, then AAA Richmond in 1995, ending his career.