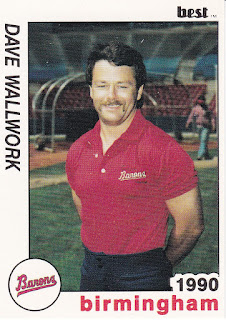 Dave Wallwork not only brought his training expertise to his work as Birmingham Barrons trainer, he also brought his dog.

His dog Fletch earned a spot on the team, as the club's "unofficial mascot," according to his 1989 ProCards card. Wallwork's Fletch was not only mentioned on the card back, but included in the photo on the front.

Wallwork has since gone on to bring his training expertise to other areas beyond baseball, in muscular therapy.

Wallwork's training career began as a graduate of Concordia University and the University of Montana. He received his Masters in health and physical education from Montana. Wallwork is a native of Missoula.

Wallwork started as a trainer in the White Sox organization in 1985. In 1986, he served as trainer at single-A Peninsula. He returned to Peninsula for 1987.

In 1988, he arrived at AA Birmingham, where he would stay for at least three seasons before he eventually moved on.

Walwork served as rehab coordinator for the White Sox over the last six of his 13 years with the organization. When the White Sox moved their spring training home west, Wallwork stayed in Sarasota, according to a bio on his current business' Yelp page.