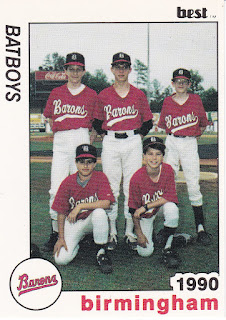 Rhett White served as a bat boy for the Birmingham Barons in 1989. Years later, he made a brief appearance as a pro player himself.

In between, according to The Associated Press, he and teammates got into a horrible car wreck that he almost didn't survive.

Three weeks after the crash, as White recovered, his Vestavia High School team went on to the state championship game - held on the same field on which he served as a bat boy, The AP wrote.

"The chance to play on this field would have blown his mind," Vestavia coach Casey Dunn told The AP in May 1995. "We're sort of living his dream because he can't."

Three years after the crash White took the mound at independent Tupelo in the Heartland League. He pitched in six games in relief and gave up one earned over 3.2 total innings.

White was one of many Birmingham Barons bat boys to take the field for the club over the years. He was one of six for the team in 1989 alone.

All six in 1989 got their own card, gracing the front of the team's checklist.

Along with White, the other bat boys were identified as Nathan Sparks, Brad Reznik, Brian Picard, Jeremy Berry and Adam Power.

At least one of those bat boys stayed with the club for 1990, and got onto the 1990 version of the team's checklist card, according to fellow bat boy Jeremy Berry. (Unlike the 1989 version, the 1990 card does not identify the bat boys.)

Reznik is the bat boy on the bottom left of the 1990 card, Berry wrote.

Berry has referenced his time as a Birmingham Barons bat boy multiple times on Twitter, including in a March 2018 tweet. Berry is now an attorney in Atlanta.

"I saw a lot of great players come through during those four years," Berry wrote. "Was an amazing experience for sure."