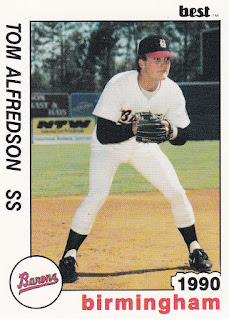 Asked by The Lawrence Journal-World about his teammate and roommate Lee Stevens, Tom Alfredson compared Stevens to himself.

"Both of us are kind of temperamental, but we've both calmed down quite a bit," Alfredson told The Journal-World in June 1988. "We've been teammates for the last couple of years and we both have a tendency to press, but we kind of help each other."

At that point, Alfredson was in his sixth season as a pro, his first at AA. His roommate Stevens was in just his third pro season. While Stevens would go on to make the majors. Alfredson never did, never making it to AAA.

Alfredson's career began in 1983, taken by the Angels in the seventh round of the draft, out of Coral Springs High School in Florida.

With the Angels, Alfredson started at short-season Salem, hitting .178 in 52 games. He moved to single-A Peoria and returned to Salem for 1984, hitting .225 between them.

Alfredson then stayed in single-A for the next three seasons, spending two seasons at Quad Cities and one at Palm Springs. At Palm Springs, in a shortened season with 52 games, Alfredson hit .299.

Alfredson returned to Midland  for 1989, but it was another shortened season, just 19 games. He then split 1990 between the White Sox and Mariners systems, both played at AA, ending his professional career.