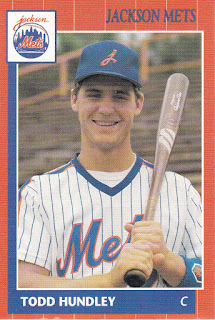 He captured the mark that had been held for 43 years by Hall of Famer Roy Campanella, a something Hundley's father, himself a former major league catcher, Randy Hundley, told The New York Times he could hardly fathom.

"When Todd starting coming up on the record and his name was mentioned in the same breath as Roy Campanella, I was like, 'You have to be kidding me,' '' Randy Hundley told The Times. ''It was unbelievable."

Todd Hundley's accomplishment may have seemed unbelievable to some. He'd seen six previous major league campaigns, four in a full-time role, and hit 50 home runs total. He then hit those 41 in 1996.

But those home runs may not have been as believable as they initially seemed, at least according to the Mitchell Report. The Mitchell Report included allegations that those 41 Todd Hundley home runs had been fueled by performance enhancing drugs.

Todd Hundley's career began in 1987, taken by the Mets in the second round of the draft out of Fremd High School in Illinois.

Hundley started with the Mets at short-season Little Falls. He returned there in 1988, then hit single-A Columbia for 1989.

Hundley made AA Jackson to start 1990, then made the jump all the way to Queens that May. Hundley later recalled his call-up to The South Florida Sun-Sentinel.

"Later that night," Todd Hundley told The Sun-Sentinel in 1992 of the night of his debut, "I was in my room, thinking to myself, 'Did this really happen? Did I just catch Frank Viola? Am I really here?' I was on an adrenaline high for three or four days."

Then, according to Kirk Radomski in the Mitchell Report, Radomski offered Hundley steroids. They'd known each other since 1988. Radomski suggested if Hundley took the drugs, he'd hit 40 home runs, according to the report.

Radomski told investigators he'd sold Deca-Durabolin and testosterone to Hundley three or four times, according to the report. A player also recalled discussing steroid use with Hundley. Hundley declined to speak with report author George Mitchell.