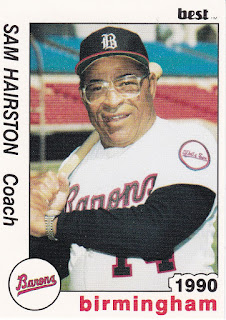 That dream, the son told the Chicago Baseball Museum in January 2013, was not only to play and make it to the major leagues, but to continue into coaching, "to do something he dearly loved."

"No one can even explain or make it real as to how much my dad really loved this game," Jerry Hairston Sr. told the museum, "how much he treasured it. To provide for his family, but also to enjoy his life."

Sam Hairston's life ended up consisting of more than five decades in the game, starting in 1945 in the Negro Leagues with the Cincinnati/Indianapolis Clowns. He went on to make the majors, becoming the first African-American member of the Chicago White Sox.

Sam Hairston's own career in the game continued until his passing in 1997, having served as a minor league instructor and coach in the White Sox organization.

Sam Hairston's career in baseball began in 1945, when the 25-year-old signed on with the Clowns, two years before integration. He played six seasons with the team, including hitting .424, with 17 home runs and 71 RBIs over 70 games in 1950, according to the Chicago Baseball Museum, enough to get signed by the White Sox.

With the White Sox, Hairston started at single-A Colorado Springs, getting into 38 games to round out 1950.

He debuted July 21, against Washington. He went 1 for 2, with a walk. That hit, a double, was, according to The Associated Press, "the Negro catcher's first major league hit."

Hairston went on to pick up one more hit the next day, and see time in two more games after that, marking the extent of his major league career.

Hairston continued playing in the minors through 1960, when he ended with 45 games at single-A Charleston. He then started his coaching career, though he isn't credited as making the majors as a coach.

By 1974, Hairston was a minor league instructor for the White Sox. By 1986, he was hitting coach at AA Birmingham. He was last credited as assistant coach at Birmingham in 1997. He passed away that October, at the age of 77.

On Jackie Robinson Day in 2007, Hairston's grandson Jerry Hairston, Jr., talked to MLB.com about the importance of the day, wearing No. 42. He also talked about his relationship with his grandfather.

"My grandfather and I were very close," Jerry Jr. told MLB.com. "We used to talk two or three times a week and this day means more when you sit and think what players went through back then when they didn't have the opportunities we did."