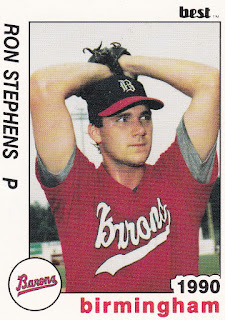 The March 2012 story in The Wheeling News-Register was about the sons of former local high school stars Ron Stephens and Mike Coss themselves playing together at Linsly High School in Wheeling, WV.

But it was also an opportunity for Coss to remember the player his former teammate Stephens was.

''He was very good,'' Coss, who himself went on to a brief pro career, told The News-Register of Ron Stephens. ''He was probably the best I've played with at any level.''

Stephens went on from Linsly to play at the University of Cincinnati and then on to five seasons as a pro. As a pro, he eventually played parts of three seasons as AAA, but he never played in the majors.

Stephens' professional career began in 1988, taken by the White Sox in the 58th round of the draft, out of the University of Cincinnati. Three years earlier, he passed on a 16th-round selection by the Red Sox.

Stephens' performance at Sarasota in 1989, which included a 1.47 ERA, also earned him a look at AA Birmingham. He went 4-3 there, with a 3.68 ERA. His time at AA also included a seven-inning win, where he struck out six.

For 1990, Stephens returned to Birmingham, going 7-10, with a 3.65 ERA, splitting time between starting and relieving. Stephens also picked up three relief outings at AAA Vancouver, giving up three earned runs in 3.2 innings of work.

Stephens has since stayed involved in the game, serving in 2012 as an assistant coach at his old school, Linsley, according to The News-Register. His son has also continued in the game, playing 2013 as a freshman with the University of West Virginia.