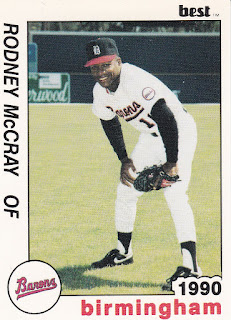 Rodney McCray finally got his first at bat of the year for the Mets in May 1992 after 16 pinch-runner appearances and he made his at bat count.

In the top of the ninth, with the bases loaded, McCray knocked a single and knocked in the game-winning run.

"I've been working every day with the hitting instructor and thinking positive, knowing I would get a chance to hit," McCray told The Associated Press afterward. "As soon as I got to first base, I said, 'that's my first National League hit, I want that ball.'"

A year earlier at AAA, McCray the fielder wanted another ball. He didn't get that ball, but in the process of chasing it to the wall - and through it - he gained baseball immortality in a play that would come to overshadow everything else he did in his decade-long career.

McCray's road to that immortality, and the majors, began in 1984, taken by the Padres in the ninth round of the January draft, out of West Los Angeles College.

With the Padres, McCray started at short-season Spokane, hitting .205 in 71 games. He moved to single-A Charleston for 1985, staying at single-A for five-consecutive seasons. Along the way, for 1988, McCray moved to the White Sox system, taken in the minor league draft.

McCray first saw AA in 1990, at Birmingham. He also saw Vancouver and Chicago. McCray made the jump all the way to the majors in late-April 1990, debuting April 30. With the White Sox, McCray got into 32 games, but got just seven plate appearances. He didn't get a hit.

For 1991, McCray played the season back at Vancouver, getting called back to Chicago in September. It was that May 27 that McCray literally ran through a wall.

At Portland's Civic Stadium, McCray went back in an attempt to catch a Chip Hale fly ball. The ball was out of reach, but before he could stop himself, he ran into the wall, and the panel he hit gave way, McCray ending up on the other side of the fence.

Among those impressed by McCray's effort, according to The Associated Press, was his manager, Marv Foley.

"This is my 18th season (of pro baseball) and that was the most courageous attempt I've seen," Foley told The AP days later. "It was death-defying, I mean beyond the call of duty."

With the entire exercise caught on tape, the clip immediately became a mainstay on every comprehensive highlight and blooper reel.

For McCray, though, there was still baseball to play. He finished out the season with Vancouver, returning to Chicago in September for 17 games, seven at bats. He also got his first two major league hits.

He then returned to the majors for a third time, with the Mets in 1992. His time there lasted 18 games, but he got just that one at bat, getting that game-winning hit. His time with the Mets that year also ended his major league career. His career in the minors ended the next season.

McCray has stayed in the game. In 2008, he was a minor league outfield and baserunning coordinator with the Dodgers. It was that year that The Bay City Times caught up with McCray as he visited the Great Lake Loons.

The kidding aside, McCray told The Times there were also lessons to be learned from the play.

"I teach the players to have no fear and to go for the ball," McCray told The Times. "I did that. But the biggest problem was poor communication. It was an artificial turf field and I couldn't feel the difference between the warning track and the field. There was no communication, so I just kept going."