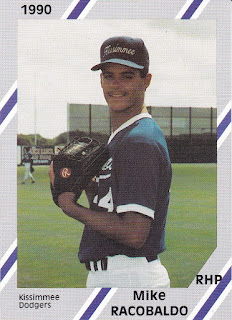 New Jersey American Legion champs Brooklawn and Mike Racobaldo took on Boyertown, Pa. in the Mid-Atlantic Regional in August 1989, but Brooklawn couldn't come away with the win, according  to The Allentown Morning Call.

Down 5-2 in the eighth, Brooklawn hurler and another reliever provided the pitching, but Boyertown pushed across four runs total, The Morning Call wrote.

Racobaldo went on from Brooklawn to play in the pros, but his stay in the pros turned out to be brief. He played a single season, completely in rookie ball.

Racobaldo's career began and ended in 1990, taken by the Dodgers in the 22nd round of the draft out of Pennsauken High in New Jersey. Racobalco was also credited by his formal name, Michael Racobaldo.

Racobaldo played his season with the Dodgers in the rookie Gulf Coast League, at Kissimmee. He got into 16 game in relief. He finished five and saved two. He also picked up a win and turned in a 1.26 ERA.