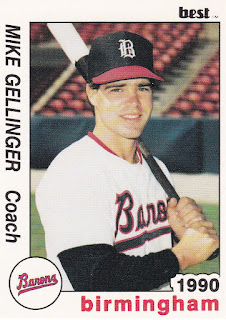 White Sox hurler Mark Buehrle had a rough stretch in 2010, giving up 18 runs in 22.1 innings of work, according to MLB.com.

But was he tipping his pitches? Buehrle pointed to team video analyst and assistant hitting coach Mike Gellinger for that answer.

"I'm not going to make excuses saying they're tipping pitches and that's why I've been getting hit around," Buehrle told MLB.com. "Mike Gellinger does a great job of watching us and watching hitters to see if we're doing something out of the ordinary."

Whether Buehrle was tipping his pitches then or not, Gellinger was credited with spotting him doing just that four years earlier. Gellinger spotted him mid-game, according to MLB.com in 2006, allowing Buehrle to correct his motion and get the victory.

Gellinger helped Buehrle as part of a baseball career that stretches back to 1986, when he signed with the Tigers as a player.

Gellinger's stay in the Detroit system lasted a single season. He moved to the White Sox for 1987, playing the year between Peninsula and Daytona Beach. He hit .283 over 86 games that season, his last as a player.

His playing career over, Gellinger moved into coaching. He coached in 1988 at single-A Tampa, the managed at short-season Utica in 1989.

In 1994, Gellinger managed at single-A South Bend, spending the previous season as the organization's minor league defensive instructor. In spring 1994, Gellinger watched over a White Sox minor leaguer by the name of Michael Jordan. That February, he watched Jordan hit a batting practice home run.

"He put a pretty good swing on it," Gellinger told The Associated Press afterward.

By 1996, Gellinger was a roving minor league instructor for the White Sox. Then, by 1999, he was a scouting analyst. Soon, he was also the White Sox assistant hitting coach.

In 2011, White Sox hitter Paul Konerko credited Gellinger, along with hitting coach Greg Walker, with helping him with his hitting, according to USAToday.

Earlier in 2011, White Sox manager Ozzie Guillen had nothing but good things to say to The Arlington Heights Daily Herald about Gellinger.

"I love him," Guillen told the Daily Herald. "I love him so much that if Joey (Cora) got the managing job (with Milwaukee last winter), Gelly was going to be my new bench coach. That's how good he is, that's how much I trust him. He's done a lot of great stuff for the White Sox."