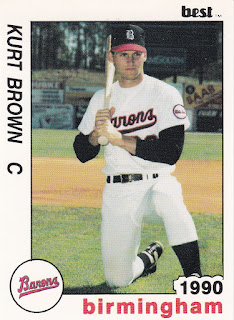 Sarasota White Sox catcher Kurt Brown was well aware of the hitting streak he was on, he told The Sarasota Herald-Tribune in mid-July 1989.

Brown had just hit safely in his 20th-consecutive game, a personal best. With the success, though, Brown told The Herald-Tribune he knew he had to just keep going.

"I just have to keep working," Brown told The Herald-Tribune after extending his streak to 20, "because it's easy to slack off when things are going good. I have to keep my concentration."

Brown was in his fifth season as a pro that year, having been taken by the White Sox in the first round, fifth overall, in the 1985 draft, directly out of high school.

He would ultimately play in seven professional seasons, making it to AAA in 1991. But he would never make the majors. He could also never shake the comparisons to the other top picks in that 1985 draft, including the player taken one selection after him, Barry Bonds.

The White Sox selected Brown out of Glendora High School in California. Brown described to The Los Angeles Times soon after how he found out he was selected.

"It was about 11:45 a.m. and I was in the locker room when my coach called me to come down to take a phone call and they (the White Sox) told me that they picked me," Brown told The Times. "It was very exciting. There was a lot of jumping and screaming."

After signing, though, Brown came back down to reality. By early August, he was hitting just .177, The Times wrote.

"It has been tough learning how to play every day," Brown told The Times, "learning how to pace yourself during practice, how to adjust to a certain pitch and getting adjusted to using wooden bats."

Brown ended the Gulf Coast League season that year hitting .205. He returned there for 1986, but spent much of the season at single-A Appleton hitting .234.

Then it was single-A Peninsula for 1987 and single-A South Bend and single-A Tampa for 1988. Then, in 1989, the catcher Brown arrived at Sarasota, where he met hitting coach Pat Roessler.

"It took me 4 1/2 years before I found a mentor," Brown explained to MLB.com years later. "That person was Pat Roessler [in 2006 the director of player development for the Yankees], and he showed me it wasn't only working hard that paid off, but knowing how to approach the game and how to learn."

With that, Brown improved his average to .270, his best single-season average. He also got his first two-game look at AA Birmingham.

Brown returned to Birmingham for all of 1990, hitting .269. In 1991, he made AAA Vancouver, hitting .248. But his time with Vancouver was his last time as a pro, his career ending after seven seasons, short of the majors.

Brown's name has come up every so often since, the reason usually being a discussion on that 1985 draft. In one such discussion in 2004 with The Herald-Tribune, Brown talked of not making the majors as the hole in his career.

"I can't say nobody gave me an opportunity," Brown told The Herald-Tribune. "When I hear the worst of players say, 'I didn't get a chance,' that's an excuse. You had an opportunity. You missed it."