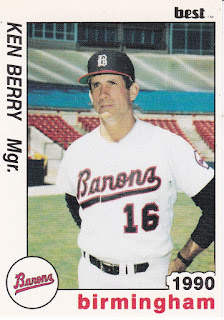 Nearly a decade into his new career as a minor league coach and manager, Ken Berry spoke to The Chicago Tribune in 1987 about his new aspirations.

Berry spoke to The Tribune then in his new job as manager for the single-A Appleton Foxes, in the Midwest League.

"I have an eventual goal to get to the big leagues for somebody, doing something," Berry told The Tribune. "Coach first base, third base, baserunning coach, hitting coach, and now I think, yes, I could be a big-league manager."

Berry never did make it to the majors as a coach, or a manager. But he did put together a career in the minors that spanned three decades.

That minor league coaching and managerial career also came after a playing career where Berry did make the majors. He made the majors for 14 total seasons.

Berry's long career in baseball began back in 1961, signed by the White Sox as a free agent out of Wichita State University.

Berry started at Class D Clinton, moving to Class C Visalia and Class A Savannah for 1962. It was also in 1962 that Berry made the jump to Chicago, getting into three games.

He hit .218 his first full year with the White Sox and .271 his second. To The Associated Press, Berry attributed his better average to a change in bats, using a heavier one.

"It makes me wait a little longer for the ball, and when I connect the ball goes a little farther," Berry told The AP.

Berry continued playing into 1975, his last five seasons with the Angels, Brewers and Indians. He ended with a career batting average of .255 and a total of 58 home runs. In 1967, Berry was an All Star.

But it wasn't his bat that Berry was known for in his career, it was his glove. When he signed with the Indians for what would be his final season, The Associated Press called Berry "one of the all-time best outfielders," backing it up by pointing out his career .990 fielding mark, tied for the record.

Soon after his playing career ended, Berry started his coaching career. In 1982, he served as manager at short-season Oneonta. In 1985, he was minor league hitting instructor for the Royals, returning for 1986.

In June 1986, Berry saw Royals top prospect Bo Jackson for the first time. He liked what he saw, according to The Memphis Commercial-Appeal.

"The best part of it, though, is how he handled the low pitches," Berry told The Commercial-Appeal. "That's the pitch he's got to handle in the big leagues and he was impressive, to say the least."

In 2004, Berry told The Great Falls Tribune about what it takes to be a good hitter.

"There's basically three things good hitters must have," Berry told The Tribune. "Balance, timing and recognition. If you have those three things in your swing, you have a very good chance to have a good approach to the ball."