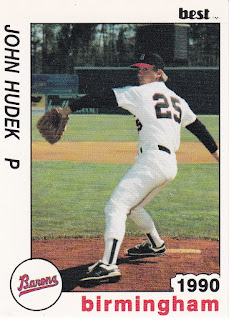 It definitely wasn't what John Hudek had planned, he told The Beaver County Times.

But, there he was in Pittsburgh, a 1994 National League All Star, having only made his major league debut April 23.

"I'm really still in a fog," Hudek told The Times. "My goal this year was simply to make the big leagues."

Hudek got to the big leagues and more. He became the Astros' closer, recording 15 saves before the break, with a sub-2 ERA. He also ended up in the strike-shortened year second in the National League Rookie of the Year voting.

Hudek, though, went on to play in just five more seasons, loosing time in his second and third years to injury. He also never again was an All Star.

Hudek's professional career began in 1988, taken by the White Sox in the 10th round of the draft, out of Florida Southern College.

He played that first year at single-A South Bend, going 7-2, with a 1.98 ERA in 26 relief appearances. Hudek moved to single-A Sarasota and AA Birmingham in 1989, getting 26 saves between them. He stayed at Birmingham, though, into 1992.

In 1992, Hudek got his first look at AAA, at Vancouver. He had a 3.19 ERA in 39 outings there. Hudek did well enough that year for the Tigers to take interest, selecting Hudek in the minor league draft. He didn't make Detroit.

Then, in July, the team that would bring him to the majors, the Astros, took him off waivers. Hudek played the rest of 1993 at AAA Tucson, then started 1994 there. He then made Houston.

And he made the All-Star team. It was National League manager Jim Fregosi who selected Hudek.

"He probably throws as hard as any closer in the league, Fregosi told The Toledo Blade leading up to the game. "He's done a heck of a job for Houston."

Hudek finished the shortened year with 16 saves, a 2.97 ERA and a distant second in the Rookie of the Year balloting.

Hudek returned to the Astros for 1995, but he only got into 19 games before a circulation problem in his throwing arm led to surgery to remove a rib. It also led to him being out the rest of the year.

The removed rib ended up on a necklace that Hudek wore to spring training in 1996. Hudek, though, soon tore a muscle in his neck, and was out again until July. He ended up getting into 15 games.

Hudek returned full time for 1997, getting into 40 games for the Astros, picking up four saves. His ERA, though, ballooned to 5.98.

For 1998, Hudek was traded to the Mets, moving mid-year to the Reds. Overall, he got 58 outings and posted a 3.09 ERA. He played just one more season, 20 games between the Reds, Braves and Blue Jays, ending his career.

After signing with the Mets for spring 1998, Hudek told The New York Times he had fully recovered from his injuries of 1995 and 1996. The NY Times also asked his thoughts on his early success and his career detour through injury.

"I'm not sure where I'd be if I didn't get hurt," Hudek told The NY Times. "Would I still be a top closer with the Astros? In my mind, I think I would. But the game can end at any time, and I saw that. It really made me appreciate the game even more. The way I look at it is that I've had two years off, and my career's going to be that much longer."

Hudek has since returned to his native Texas, and continued with the game. Hudek serves as a pitching coach with the select youth baseball association the Fort Bend Texans.

"The feedback we get from high school coaches is that the kids don’t know the fundamentals," Hudek told The Daily News. "They don’t have time to teach it. So if the kid doesn’t know it, then it’s going to hurt them in the long run. We’re here to develop these kids. We concentrate on development."