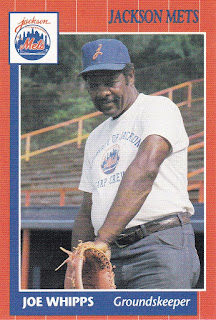 The Jackson Generals experienced a deluge of rain in early 1991, but they had Joe Whipps there to keep the field at Smith-Wills Stadium in the best shape possible, according to The Jackson Clarion-Ledger.

His work drew praise from many, including Generals owner Con Maloney, according to The Clarion-Ledger.

"No matter when you come out here, Joe's working," Maloney told The Clarion-Ledger. "Our field shows it."

Whipps served then as head groundskeeper with Jackson. The previous year, he served with the club when it was named the Mets.

He also got his own baseball card.

To start 1990, Whipps and Jackson got a visit from the New York Mets groundskeeper as Whipps treated the field with a "cactus-derived substance," according to The Clarion-Ledger.

Whipps' card gives some background, though it's unclear how grounded it is. According to his card, Whipps "set Jackson record for rolling field tarp 44 times during 1989."

It also notes how Whipps was supposedly obtained, that he was "Traded by Cowboy Maloney's," and instead of his batting and throwing details, noted his raking and shoveling. He raked right and shoveled left.