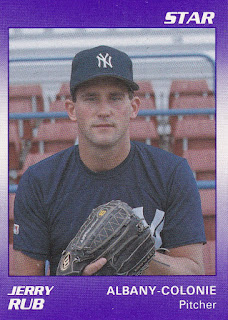 Jerry Rub came in to a jam. He left with the win.

The reliever Rub picked up eight total outs for the AA Albany-Colonie Yankees, without giving up a hit in that April 1991 contest. He did so as his A-C Yankees took a lead they wouldn't relinquish, The Schenectady Daily Gazette wrote.

"I was just trying to get ahead of the hitters and not lay the ball in there," Rub told The Daily Gazette afterward. "That was a tough situation with the bases loaded."

Rub would soon be promoted to AAA Columbus, where he pitched briefly two years earlier. For Rub, though, it would be his final season of six as a pro. Rub never got the chance to work out of a tough situation in the majors.

Rub's career began in 1986, taken by the Yankees in the ninth round out of the University of South Alabama. Born Ronald Rub, Rub went by his middle name, also spelled Gerry.

Coming out of South Alabama, Rub had just helped his team to a win in the Sun Belt Conference tournament, striking out nine and giving up just two hits.

With the Yankees, Rub started at short-season Oneonta, posting a 2.12 ERA with 48 strikeouts in 46.2 innings of work.

He moved to single-A Fort Lauderdale for 1987, with an ERA there of 3.67. He also picked up two wins, his second coming in relief in June. In August, he worked five innings of relief in one game, striking out five.

In 1988, Rub got his first look at AA, at Albany-Colonie. He split that year between single-A Prince William and Albany, posting an ERA between them of 1.77. With Albany, Rub was used to target left-handers.

But it was back to Albany for 1990, with even some time at high-A Fort Lauderdale. His ERA ballooned to 5.17 over 37 total outings.

Then came his final year, 1991. Rub got into 54 games between Albany and Columbus, most of those coming at Columbus. His ERA came in at 3.27. He also struck out 68, ending his career.