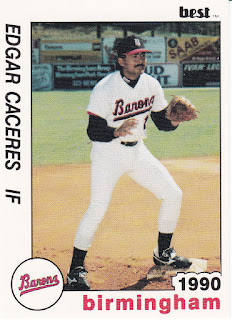 Edgar Caceres really wanted that ball, he just had to bargain with the fan who caught it to get it, The Associated Press wrote.

"I told him to call me at the hotel and I'd see what I could do," Caceres told The AP afterward of the fan's demands. "I would give almost anything to get that ball back. But he did ask for a lot."

Caceres hit that first home run Aug. 4, in his 28th major league game. He went on to play in 55 games that year for the Royals. That home run would be his only one on the year, and the only one of his brief major league career.

Caceres' career began in 1983, signed by the Dodgers as an undrafted free agent out of his native Venezuela.

With the Dodgers, Caceres first played in 1984, in the rookie Gulf Coast League. He returned there for 1985, then moved to the Expos system and single-A West Palm Beach for 1986. He went 4-for-4 in one August 1986 contest.

He returned to Palm Beach in 1987, getting his first brief look at AA Jacksonville. In a May game, Caceres went 4-for-5 for Palm Beach, crossing the plate with the winning run in the ninth.

Caceres moved to the White Sox system in mid-1988, after a trade. With the White Sox, Caceres stayed in single-A until 1990, when he played 62 games at AA Birmingham, hitting .262.

For 1991, Caceres is listed as being out of baseball. But he returned in 1992, with the Brewers. With them, he played at AA El Paso, then hit AAA New Orleans in 1993. For 1994, Caceres signed with the team that would eventually bring him to the bigs, the Royals.

Caceres played four more seasons in pro ball, but never made it back to the bigs. He played 1996 and 1997 at AAA with the Brewers and the Angels, then 1998 and 1999 in Korea, ending his playing career.

Caceres has since gone to continue in baseball, as a manager in the minors, and as an instructor. He spent five seasons managing in the Reds organization, then another with the Nationals. Since 2008, he has been an instructor with the IMG Academy in Florida, continuing in 2013.

With the Reds, Caceres managed three seasons in the rookie Gulf Coast League, from 2001 to 2003. Years later, he recalled to The Chatham Daily News life managing in rookie ball.

"Managing that level, you never think, 'This guy is going to be an MVP or a franchise player some day,'" Caceres told The Daily News. "What you think about is baby steps. Baby steps."