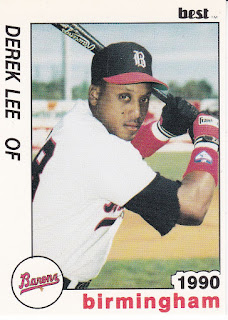 In spring training 1992 for the White Sox, Derek Lee knew he wasn't going to make the team. But he wanted to make the best impression he could. He wanted them to remember him later.

"I know who's going to go up north," Lee told the Chicago Tribune, referring to the team's AAA club in Vancouver. "The White Sox in '92 are going to be a good team. They're going to win. I want to be a part of that, one way or another."

Lee wouldn't make the team that year, but he would make the majors briefly the next after a change in organizations.

Lee was taken by the White Sox in the late rounds of the 1988 draft, the 42nd round, out of the University of South Florida. He had once been more sought after. (He, of course, is not to be confused with the current player with the similar name, the Cubs' Derrek Lee.)

The Phillies took him as the 17th pick overall in the 1986 June secondary draft, but he didn't sign. It was a loss of power that caused the drop, according to the St. Petersburg Times in a Google News Archive search.

Lee never did show much power in the minors. He hit 11 home runs at single-A South Bend in 1989. Hit seven home runs at AA Birmingham in 1990, one of those coming as an insurance run in a 2-0 May win.

For 1989, the Chicago Tribune pegged him as a sleeper in the White Sox system, calling him a speedy leadoff hitter.

But his batting averages were consistently good. He hit .341 at short-season Utica and .305 between AA Birmingham and Vancouver in 1991.

By 1993, Lee was drafted away from the White Sox by the Twins. That spring, Lee homered, doubled and drove in three runs in a Twins victory, according to a wire account in the Schenectady Gazette.

"I've had a lot of at-bats this spring," Lee told reporters afterward. "I feel fairly comfortable out there."

Lee was sent back down, but the Twins did remember him. They brought him up in June. In 15 games that June and July, Lee had 33 at bats, scored three runs and batted in four. He also had a batting average of just .152.

He had a pinch-hit double July 21 to knock in one of those four. An earlier single on June 29 knocked in another.

Sent back down, Lee would go on to play with six more organizations through 1998, all at AAA, never getting back to the majors.