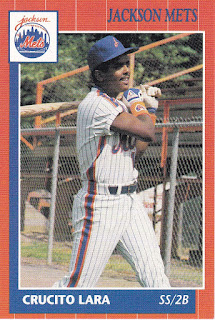 The Jackson Mets could do little with Midland Angels starter Kyle Abbott in this August 1990 contest and Jackson infielder Crucito Lara attempted to explain to The Jackson Clarion-Ledger.

"He had a fast delivery, and he came from the top with his breaking ball," Lara told The Clarion-Ledger afterward.

Lara's pro career began in 1984, signed by the Cardinals as an amateur free agent out of his native Dominican Republic.

Lara started with the Cardinals at rookie Johnson City. He hit .173 over 36 games. He then made short-season Erie in 1985 and single-A Savannah for 1986.