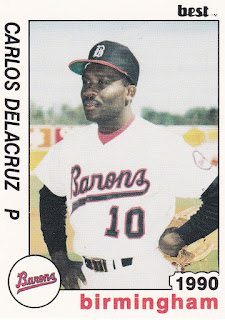 The Gulf Coast League White Sox needed a good pitching performance to keep their 1987 division hopes alive, according to The Sarasota Herald-Tribune, and Carlos Delacruz delivered it.

In his second season as a pro that August, Delacruz pitched a complete game, six-hitter, giving up just a single run, The Herald-Tribune wrote.

Delacruz also got time that year at single-A Daytona. He went on to play in four more seasons, getting to AA Birmingham. Delacruz, though, would never make the majors.

Delacruz' career began in 1986, signed by the White Sox as an undrafted free agent out of the Dominican Republic.

With the White Sox, Delacruz started in the rookie Gulf Coast League, getting 14 outings, six starts. He went 2-4, with a 3.26 ERA.

As a full-time starter in 1989, Delacruz went 15-7 between South Bend and Sarasota, with a 2.55 ERA. In July, Delacruz threw a rain-shortened, three-hit shutout for Sarasota, Delacruz preventing any opposing runner from taking third base, according to The Herald-Tribune.

For 1990, Delacruz hit AA Birmingham, getting 12 starts there. He ended up going just 1-7, wit ha 7.55 ERA. He also got three outings back in the GCL. Ten final Gulf Coast League outings in 1991 and Delacruz' career was over.