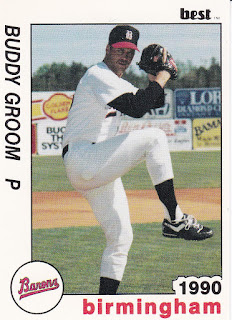 Toledo Mud Hen starter Buddy Groom only went five innings in this April 1992 contest, but they were shutout innings. They were also enough for the win, The Toledo Blade wrote.

Groom didn't go long, Groom told The Blade, because of concerns over his use that spring, and a change in pitching roles.

"My longest outing in spring training was four innings," Groom explained to The Blade. "I was in the big league camp and I was only pitching one-inning stints. But then (Tigers manager) Sparky (Anderson) tells me I'm a better starter. So I didn't want to go too long tonight."

As it turned out, Groom wasn't a better starter. He was a far better reliever. And, while he didn't rack up big save totals - he picked up just 27 over his 14 big league seasons - he did rack up big appearance totals.

By the time Groom was done in 2005, he'd seen time in 786 total big league games, played for six different big league teams. His stint of 70-appearance seasons came with the Athletics and Orioles.

Groom's long professional career began in 1987, taken by the White Sox in the 12th round of the draft, out of the University of Mary Hardin-Baylor in Texas.

Moving to the Tigers system for 1991 in the minor league draft, Groom got his first look at reliving. He got 35 outings, with just 13 starts, between AA London and AAA Toledo.

In 1994 that Groom got his first extensive use in the majors, getting 40 relief outings. He then got 37 relief outings in 1995 between the Tigers and Marlins.

It was in 1996 that Groom started his string of seven-straight seasons with 70 or more relief outings. He did so with the Athletics, signing there as a free agent in the off-season.

Over his four seasons in Oakland, Groom never pitched in fewer than 72 games. In 1999, he led the league with 76 appearances. He then continued his streak over the next three seasons with the Orioles, getting into an even 70 games in each year.

From 2000 to 2001, Groom also had a streak of 67 appearances where he wasn't charged with a loss, according to The Baltimore Sun.

"I really had no idea. I don't even look at that stuff," Groom told The Sun in July 2001, after his lossless streak ended. "Other than how many runs I've given up, I don't know what my stats are unless somebody shows me. I just try to go out there when I'm called on to get guys out. If I don't get them out, then I work on the next night."

As for his 70-outing streak, Groom made it that year, and the next. In 2003 and 2004, Groom's durability continued, getting 60 outings in each of those years. His career ended in 2005, with 47 outings between the Yankees and the Diamondbacks.

As the 2001 season wound down, Groom's 70-outing streak appeared to be in jeopardy. Groom, though, wasn't worried about it, according to The Sun.

"I'm just hoping I can help the team when I get in there," Groom told The Sun. "It's never been something where I've felt like I've been overtaxed or it's been hard to do. I've been available to do it. That's the thing I'm thankful for."