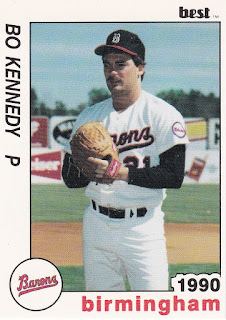 Bo Kennedy first made AA Birmingham in 1990, his fifth season as a pro. He made it there after a season where he posted an ERA barely over 3 at single-A Sarasota.

That compared to an ERA that first year at Birmingham of 4.73.

"If you make a mistake in Double A, the hitters are going to capitalize on it," Kennedy explained to author George Gmelch in Gmelch's 2001 book "Inside Pitch: Life in Professional Baseball." "If it's 2-0 and you throw one down the middle, they are going to hit it hard somewhere. Down in A ball you might get away with it, but not here. Not often."

Kennedy did make the adjustment to AA, the next year, then earning a promotion in the White Sox organization to AAA Vancouver. Kennedy, though, never had a chance to adjust to pitching the next step above that, in the majors.

Kennedy's career began in 1986, taken by the White Sox in the sixth round out of Flat River Central High School in Missouri.

At Birmingham in 1991, Kennedy went 10-3, dropping his ERA to just 2.32 in 15 starts. He also made the Southern League All-Star team in July, but he couldn't play. That's because he got called up to AAA Vancouver, The Chicago Tribune wrote.

Kennedy got 17 outings, five starts, at Vancouver that year. His ERA in those outings was 7.85.

Kennedy played just two more seasons in the minors, one with the White Sox largely back at AA Birmingham, and the second with the Reds. With the Reds, Kennedy played much of the season at AAA Indianapolis, but he never saw Cincinnati.

Kennedy returned for one more spring, spring 1995, ending his career short of the majors.