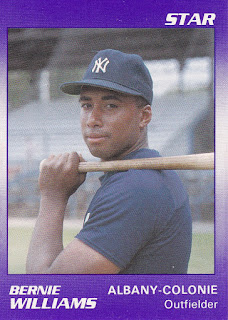 The Yankees had the semblance of a rotation and relief corps going into 1990, thanks to two winter meeting pickups from the Pirates. But they had no closer. To remedy that situation, the White Sox offered up their own, Bobby Thigpen.

Chicago just needed a couple prospects in return, one of them being the young Bernie Williams.

"They're looking for pitching. They just got some, and they're still looking for it," White Sox manager Jeff Torborg told The Chicago Tribune. "There's no hiding the fact that we're interested in Bernie Williams."

That deal, of course, never got done. Nor did any other deals get done as Williams never left the Yankees, then or ever. He ended up spending 16 seasons manning Yankee Stadium's center field, becoming a five-time All Star and a cornerstone on four world championship teams.

Williams' career with the Yankees began in 1985, signed as a free agent out of Puerto Rico. His first playing time came in 1986 in the rookie Gulf Coast League. He made steady progress, hitting .335 at single-A Prince William in 1988, earning some trade attention from the Braves that next spring. He also earned a spot on the Yankees' 40-man roster.

''He's a quality-looking athlete,'' Yankees hitting coach Frank Howard told The New York Times in February 1989. ''He has fantastic bat speed, he can sting the ball and he has great reflexes.''

That year, Williams got his first look at AA Albany and AAA Columbus. He made the Bronx in 1991, playing 85 games there, debuting July 7.

"I was nervous out there at first," Williams told the Times after his debut. "I didn't expect this many fans."

There would be many more fans to come. By 1993, Williams was playing every day as the Yankees' every day center fielder. He even reluctantly made his first curtain call that year, in June.

"It's tougher mentally than physically when you know you're playing everyday," Williams told The South Florida Sun-Sentinel in April 1993, "but the good players and the great ones are separated by how they approach the game mentally. I believe I'll make my mark in this game."

Williams made his first All Star team in 1997, the first of five-consecutive appearances in the mid-summer classic. He also won a batting title in 1998 with a .339 average. In 1999, he started off the postseason with a six-RBI game against the Rangers. Later, he started the ALCS the same way he did in 1996, with another game-winning home run.

''Bernie is that type of player,'' the Yankees' Darryl Strawberry told The Times after that early-October performance. ''He's a complete player. "He can do just about anything he wants on the baseball field. Nobody in here is surprised by what he did. Bernie has a tendency to step up in the post-season. He's real quiet, but we know what he can do.''

Williams turned 35 in 2003 and his age started to show. He misplayed a some balls and some started wondering if his days in center field were numbered, MLB.com wrote in October.

Among the mistakes was a Game 1 ALDS drop that the Yankees recovered from and another in Game 3.

"As long as the coaching staff and the manager have confidence in my ability and they keep throwing me out there, that's all I'm concerned with," Williams told MLB.com after the third game. "Hopefully better times will come and I'll have more chances to do a better job."

By May 2005, Williams time as the Yankees' everyday center fielder ended. By spring 2007, his days as a Yankee ended. The Yankees invited him to spring training without a guaranteed roster spot. Williams chose to stay home.

As 2007 began without Williams on the Yankees roster, fans in the outfield chanted his name: "We want Bernie," The Times wrote.

Addressing Williams' impact on the team after the game was the closer the Yankees got years after their chance to get Thigpen, the closer that came through the Yankees system just like Williams did, Mariano Rivera.

"The job Bernie did for this organization, this city, was tremendous," Rivera told The Times. "Those fans out there, they know."