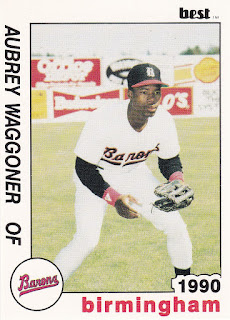 Aubrey Waggoner batted .292 with two home runs and six stolen bases for the Birmingham Barons in April 1991. It was enough for Waggoner, according to The Chicago Tribune, to be named the White Sox' minor league player of the month.

But, while Waggoner won the honor for the month, he was already in his fourth season playing for the AA Barons. Waggoners' was a career that would last for eleven seasons and one that would never reach the majors.

Waggoner's career began in 1985, taken by the White Sox in the fifth round of the draft. He made single-A Appleton in 1986 and he first made AA Birmingham in 1988. He raced home that July 31 with the winning run on a bunt.

But his batting average would rarely top .250, something The Tribune alluded to in April 1990, that he was noted mostly for his speed. That April he broke that mold, hitting a grand slam as part of an eight-run inning.

He stayed at Birmingham into 1991, when he first saw AAA at Vancouver. It was the month after his player of the month honors, with Vancouver, that Waggoner played a role in a memorable play, or accused of not playing a part in preventing it.

On May 27, 1991, Waggoner teammate Rodney McCray chased a fly ball and broke through the outfield fence. It was a play that would later be commemorated with its own bobblehead. But in spring 1992, McCray told The South Florida Sun Sentinel he had expected a yell from his center fielder, that he was nearing the wall.

That year was Waggoner's last with the White Sox, after eight years. He went on to the Braves system in 1992, Seattle in 1993 then the Braves and Expos in 1994. Waggoner's career ended in 1995 with 16 games at AAA Pawtucket. These days, Waggoner works giving lessons through Hitters Choice in California.