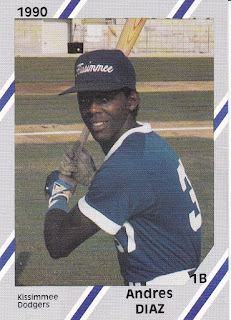 Andres Diaz started his professional baseball career in his native Dominican Republic and he ended it in the United States.

For Diaz, though, the recorded start and end to his career occurred within two seasons. He played one year in rookie ball in the United States and didn't make it further.

Diaz' career began in 1988, signed by the Dodgers as a free agent out of his native Dominican Republic.

He's listed on his 1990 card as attending Liceo A. Perez High School and residing in Palenque, D.R.

Stateside, the Dodgers assigned Diaz to the rookie Gulf Coast League, at Kissimmee. He got into 60 games in the GCL. He hit .267, with one home run and 30 RBI to mark the extent of his career.