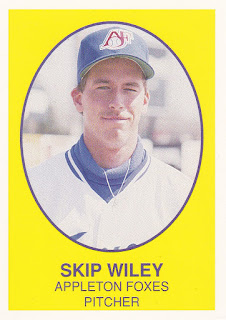 Skip Wiley wasn't drafted, but the Royals were happy to have him in the system 1990.

That's because the second-year starting pitcher was keeping runners off base, according to The Eugene Register-Guard.

"He had a phenomenal strikeout-to-walk ratio" at short-season Eugene in 1989, Royals assistant director of scouting and player development Bob Hegman told The Register-Guard, "and he's doing it again at Appleton."

Wiley struck out 41 at Eugene in 1989 while walking just seven. At Appleton, he struck out 82, walking 22. But he couldn't keep it up. He pitched in just five seasons. He made AA, but he couldn't make it higher.

Wiley's career began in 1989, signed by the Royals as an undrafted free agent out of Indiana State. He went there out of Johnson County Community College in Kansas.

At Johnson County in 1987, Wiley won All-Conference honors as a pitcher. In an April game, he struck out 10 and walked one, frustrating opposing Fort Scott, even after he lost steam.

"(Wiley) threw good ball for about for innings," Fort Scott coach Daryl Graham told The Fort Scott Tribune. "I told the guys, 'Be patient and he'll make a mistake.' But we weren't patient."

For 1988, Wiley moved on to Indiana State. He helped throw a no-hitter- there March 30, 1988. He also won conference All-Academic honors.

With the Royals, Wiley started at short-season Eugene as a reliever. He got 21 appearances, posting a 1.05 ERA. He pitched a perfect inning in a mid-July game. In late-August, he pitched two innings of relief for the save.

He moved to the Marlins system for 1993. It ended up being his final season as a pro. He got seven games at single-A Kane County and 11 at high-A High Desert. He had a combined ERA of 4.99, ending his career.