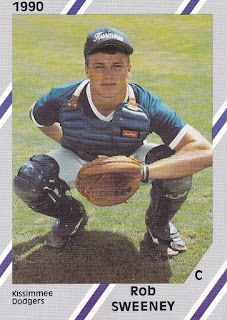 Rob Sweeney's pro career took him from the receiving end of pitches to throwing them.

Sweeney began his career as a catcher for the rookie Gulf Coast League Dodgers at Kissimmee. He then got a taste of pitching that same season, seeing two appearances on the mound.

He switched full-time to pitching by his second full season in the pros. But the switch couldn't get him a long career. He pitched in one more campaign. He never made AA.

Sweeney's career began in 1990, taken by the Dodgers in the 48th round of the draft out of Waukesha County Technical College in Wisconsin. Sweeney was also credited by his full name Robert Sweeney.

He played his high school ball at Muskego High School in Muskego, Wisc. The Wisconsin State Journal checked in on him and other Wisconsin-natives in 1992.

Sweeney started with the Dodgers at Kissimmee. He got into 21 games as a hitter, 18 of them as a catcher. He also played twice in the outfield. He picked up four hits in 32 at bats.

In his two trips to the mound that year, Sweeney saw two innings of work, gave up one hit and didn't give up a run.

He returned to Kissimmee for 1991. ProCards noted on his card that year that the season would be his first as a pro pitching. Sweeney got into 15 games, starting once. He went 3-3, with a 4.36 ERA.