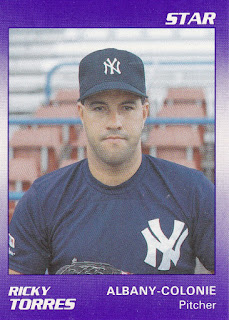 Ricky Torres took over for the starter in the third inning. He then went on to eat 6.1 innings for AA Albany-Colonie in that 1988 contest, giving up just four hits and one run.

He also picked up the win.

"Ricky shut them down after that inning, and that's what a long reliever is supposed to do," Albany-Colonie manager Stump Merrill told The Schenectady Gazette. "If we had to go to the bullpen again, we'd be in trouble for a few days."

Torres shut them down that June, one of 19 games Torres got into that year at Albany. He ultimately posted a 3.52 ERA, and he returned to Albany in 1989.

Torres ultimately made it to AAA Columbus in 1990, but, in a career that saw time in eight seasons, Torres never made the majors.

Torres' career began in 1984, signed by the Yankees that year as an undrafted free agent. He played that first season at single-A Greensboro, going 8-4 as a starter, with a 3.69 ERA.

That June, The South Florida Sun-Sentinel wrote about Torres' strikeout work. He ultimately used his slider to punch out 107 in 92.1 innings of work. Though he threw that slider well, team officials tried to get him to work on his other pitches.

"We have to try to make him get more confidence in his fastball," Fort Lauderdale pitching coach Bill Monbouquette told The Sun-Sentinel. "We're also teaching him a sinker, which he can throw, but he won't with a couple of guys on. He's got to gain confidence."

Torres also got a single game at AA Albany in 1985, returning to Albany in 1987. In the meantime, he pitched back at Fort Lauderdale and single-A Prince William.

It was in 1987 that Torres moved from starting to relieving. He got into 51 games that year between Albany and Prince William, just one of those outings a start. He picked up eight saves for Prince William, getting his sixth in an early July outing.

That year, Torres also roomed with fellow Albany players Oscar Azocar and Bernie Williams. Williams recalled years later that Torres had the car of the three. Torres was also the cook.

"He was a great cook," Williams recalled in 2004 to BaseballFans.net. "He cooked Latin food mostly, rice and beans, shrimp, seafood. We would barbecue after the games, too, sometimes at 11 or 12 at night."

Torres got just one more season with the Yankees, 30 outings between Albany and AAA Columbus. He is recorded as returning to the pros in 1995, getting 32 outings, 11 starts, with the Expos at AAA Ottawa, ending his career.

Back in 1989, as Torres split his time between starting and relieving, Torres waited through four rainouts to start a game in May, filling in for an injured Mike Christopher. He ended up going 5.1 innings in the seven-inning double-header contest.

"Right now, I like relieving," Torres told The Gazette. "And I know Christopher is about ready. Relieving is a tough situation. You have to throw strikes, and there's usually people on base."