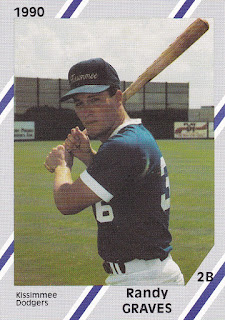 Randy Graves proved a feared hitter in college, enough so that a rival coach pitched around the Riverside Community College batter, according to The Los Angeles Times.

The next batter in this May 1990 game, however, made Fullerton College pay with a two-run single, The Times wrote.

"We figured Graves would hurt us so we didn't want to pitch to him," Fullerton coach Nick Fuscardo told The Times. "But the next guy gets a high fastball and beats us anyway. "

Graves turned pro soon after, but he couldn't replicate the success he'd had in college. Graves played two seasons, both in rookie ball.

At Riverside, Graves tripled and scored in that same May 1990 game and the .406 hitter later knocked a two-run single.

With the Dodgers, Graves started in the rookie Gulf Coast League. He hit .284 over 57 games. He recorded 28 RBI and 10 doubles.