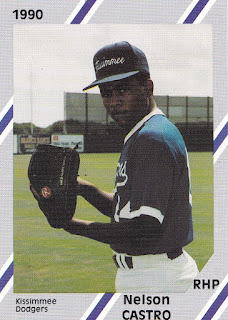 That, Todd told The News, "gave me an idea to look down, and he threw me one over the middle. It helps when a guy's around the plate."

Castro pitched in his second season as a pro that year. He went on to pitch in four more. He briefly made AAA, but he never made the majors.

Castro's career began in 1990, signed by the Dodgers as an amateur free agent out of his native Dominican Republic.

Castro started with the Dodgers in the rookie Gulf Coast League. He went 3-1 in 10 starts, with a 4.25 ERA. In September, he picked up the win in the league title game, coming in for the final 4.2 scoreless innings.

He moved to rookie Great Falls for 1991. He went 7-4 in 14 starts there, with a 5.26 ERA. He picked up his fifth win in an early August outing, going seven innings and giving up three hits.

Castro isn't credited as pitching in 1992, but he returned for 1993 and saw high-A Bakersfield and AA San Antonio. He went 6-8 over 25 starts on the year.

He then played between the same two squads in 1994 and went 10-7. He picked up a win in relief in an early September game, going three innings and giving up one earned.

Castro played 1995 largely at San Antonio, but he also got a two-game look at AAA Albuquerque. He went 2.1 innings there and didn't give up a run.