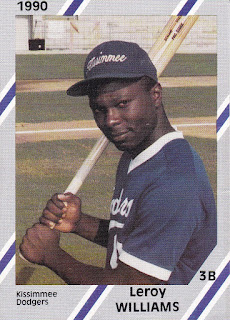 Great Falls started off the 1991 playoffs with a win against Salt Lake at home. Great Falls infielder Leroy Williams pointed to experience playing at Salt Lake as being on their side going back to Utah, according to The Great Falls Tribune.

"We were nervous playing in front of big crowds in Salt Lake. We had never been there before," Williams, who went 3 for 4 in the opener, told The Tribune. "We've experienced that now, so we should be a lot more relaxed this time. I think we'll play better."

Williams made the playoffs with Great Falls that year in his second season as a pro. He'd miss 1992 to injury and return for one more campaign in 1993. He never made AA.

Williams' career started in 1990, taken by the Dodgers in the second round of the draft out of East St. John High in Garyville, La.

Williams started with the Dodgers in the rookie Gulf Coast League, at Kissimmee. He hit .313 over 58 games. He moved to Great Falls for 1991, but saw only 23 outings. He hit .297. He knocked in a run in a late August game.