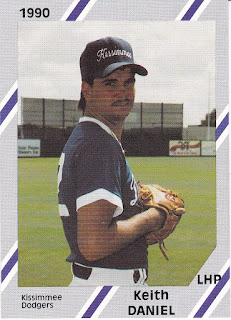 "Keith has a great amount of poise," LaRocque told The Star-News. "We feel he can develop into a real solid pitcher. He has a lot of maturity and a tremendous attitude."

LaRocque spoke to The Star-News upon the high schooler signing his first pro contract with the club.  Daniel's career, however, turned out brief. He played two seasons. He never made it out of rookie ball.

Daniel's career started that year in 1989, selected by the Dodgers in the 15th round of the draft out of Pender High School in Currie, N.C.

He started with the Dodgers in the rookie Gulf Coast League, at Kissimmee. He went 2-2 over 16 outings, two starts. He also posted a 3.89 ERA as he helped the club to the league championship series.