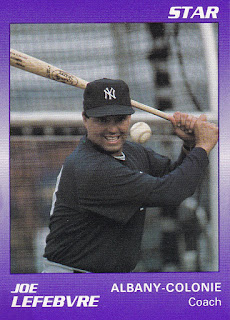 A newly minted professional player, Joe Lefebvre spoke to the St. Petersburg Evening Independent in 1977 about his first season as a pro and his life as a pro player.

Lefebvre was then with the Fort Lauderdale Yankees, coming to the team out of St. Petersburg's Eckerd College.

"Here you only have one thing to do and that's play ball," Lefebvre told The Evening Independent that August. "And I love to play ball."

Lefebvre continued to play ball for much of the next decade, before a lingering knee injury ended his career. But his time in the game has lasted much longer as a coach and a scout, continuing into 2013 as assistant hitting coach for the San Francisco Giants.

Lefebvre's baseball career began that year in 1977, taken by the Yankees in the third round of the draft, out of Eckerd.

He got a look at AA New Haven his first year, then made AAA Columbus in 1980. That May in 1980, Lefebvre got called up to the Bronx.

In his first game with the big league Yankees, Lefebvre got his first major league hit, a home run. He hit another home run in his second game.

"I fantasized about hitting a home run on my first hit for years," Lefebvre told UPI after that first game.

Lefebvre ended up playing in 74 games for the Yankees that year, moving to the Padres for 1981. He then continued playing in the majors into 1984, when a knee injury struck.

"I'll miss baseball," Lefebvre told The Associated Press after his decision. "It's been my life. I've cried a lot over this."

But he wasn't out of baseball for long. The next year, he served as hitting coach at AA Reading. In 1990, he moved to the Yankees at AA Albany. Then by 1996, he was hitting coach with the Giants at AAA Phoenix.

By 2003, he was hitting coach in San Francisco, helping his hitters get out of slumps.

"It's crazy, sometimes it just takes a couple of knocks and everybody starts to loosen up," Lefebvre told MLB.com in April 2004. "I think it's everyone staying within themselves, not trying to do too much. At times, when guys struggle they try to go 5-for-5 and they end up just fighting themselves."

Lefebvre continues with the Giants for 2013 as assistant hitting coach.