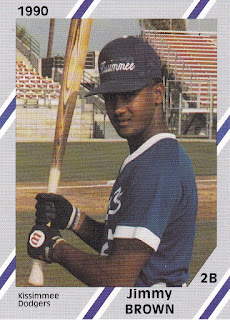 Jimmy Brown had some look at success in 1989, according to The Orlando Sentinel.

Brown was a member of the rookie Gulf Coast League's Kissimmee Dodgers who won their division and fell in the finals, The Sentinel wrote.

Brown returned to Kissmmee for 1990, one of three players to do so. That team went on to take the league title. Brown went on to play in one more season. He never made single-A.

Brown's career began in 1989, taken by the Dodgers in the 40th round of the draft out of Carlos Escobar Lopez High School in Puerto Rico.

Brown played his first season for the Dodgers' GCL entry. He got into five games and went 1 for 7, with an RBI.