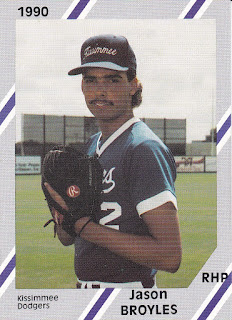 Jason Broyles came on in relief in this August 1991 game for rookie Great Falls and he helped seal the win, according to The Great Falls Tribune.

Broyles pitched two innings, didn't give up a run and took the relief win, The Tribune wrote.

Broyles picked up that relief win in his second season as a pro. It also proved his last season. His career ended that year. He never made single-A.

Broyles' career began in 1990, signed by the Dodgers as a free agent out of Dewitt High School in Michigan.

At Dewitt, Broyles played well enough to go 10-0 and make the all-area team.

Broyles started with the Dodgers in the rookie Gulf Coast League at Kissimmee. He started 11 games there and went 4-2, with a 2.58 ERA.