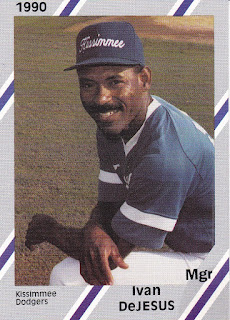 Ivan DeJesus was a good shortstop for the Cubs in 1981, but he didn't get as much attention as other good players at that position, UPI wrote.

DeJesus was OK with that. He had his sights elsewhere, according to UPI.

"It doesn't matter, really. I'd like to be on an all-star team, a World Series winner, but I've got a job to do and I do it the best I can," DeJesus told UPI. "I want to win and I want to do the best I can."

DeJesus did his best over 15 major league seasons. He never made an all-star team, but he did make the World Series twice, with the Phillies in 1983 and the Cardinals in 1985.

He then went on to a long career as a minor league manager and coach. He also returned to the majors with the Cubs in 2007 as a coach.

DeJesus' long career in baseball began in 1969, signed by the Dodgers as an amateur free agent out of Puerto Rico.

He started with the Dodgers in 1970 at single-A Daytona Beach. He made AAA Albuquerque in 1974 and debuted in Los Angeles that September.

DeJesus got into three games for the Dodgers in 1974 and into 63 the next. He moved to the Cubs in 1977 and became a major league regular.

He continued with the Cubs through 1981, when he moved to the Phillies. In 1983, the Phillies made the World Series, but DeJesus made a costly error late that gave the game to Baltimore.

DeJesus saw his last extended play in 1985 with the Cardinals. He then played briefly in each of the next three seasons to end his playing career.

By 1990, DeJesus was back with the Dodgers, managing their Gulf Coast League entry at Kissimmee.

"This is the first time most of these young men have been away from home," DeJesus told The Orlando Sentinel that July, "so I'm trying to teach them what I know about the game - how to learn from their mistakes and be organized."

DeJesus continued on from that start to serve as a coach and manager for more than 20 years. He served as hitting coach at AA Jacksonville in 1993, manager at short-season Pittsfield in 2001 and made the Cubs as assistant coach in 2007.