Henry Blanco's father taught him to give 100 percent; Did so over 16 ML seasons, later coached 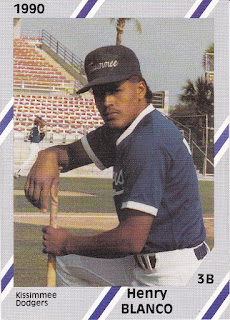 Henry Blanco's major league career was barely two seasons old in 2000 when he lost his father to cancer, according to The Racine Journal Times.

Blanco, though, took his father's passing as a challenge to play harder for him, he told The Journal Times.

"He taught me just to give 100 percent all the time," Blanco told The Journal Times. "I remember that every day, especially when I'm tired. I take that with me, just like if he was beside me."

Blanco continued to give his all and he did so over the next 13 major league seasons. By the time his career was done, he'd seen time in a total of 16 big league campaigns and nearly a quarter century of baseball.

He's since gone on to continue in the game as a coach.

Blanco's career began in 1989, signed by the Dodgers as an amateur free agent out of his native Venezuela.

Blanco started with the Dodgers in 1990, in the rookie Gulf Coast League at Kissimmee. The third baseman hit .219 in 60 games.

He got his first look at catching at San Antonio in 1995 and soon made the switch full time for 1996.

Blanco got his first look at the majors in 1997, a three-game look with the Dodgers. He went 2 for 5.

Blanco also became Greg Maddux' personal catcher in 2002. He hit a two-run home run to win a June game against the Mets. His skills behind the plate and at the plate drew praise from teammate Chipper Jones, according to The New York Post.

"He's hit two game-winning home runs for us, not to mention he's the best defensive catcher in the league" Jones told The Post.

Blanco moved to the Twins for 2004, then the Cubs for 2005. He stayed in Chicago for four seasons.

Blanco signed with the Padres for 2009 and Padres GM Kevin Towers explained to ESPN why.

Blanco continued playing in the majors through 2013. In August 2013, at the age of 41, he hit a late home run that proved the game-winner.

Blanco had hopes of continuing in 2014, but those hopes soon turned into a coaching job with the Diamondbacks and the end of his playing career.